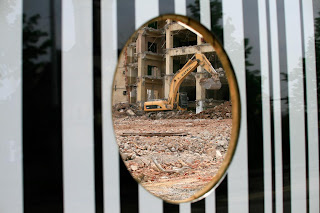 With the monday walks, plan b reveal a unique aspect of the much-analysed Montagsdemos in Leipzig in 1989. With the collaboration of students from the University and the visualisation team avp::ptr, they will visualise the journeys of some of the people that attended the demonstrations. Their journeys will be reconstructed and recording using GPS. In the final presentation, lines will be seen, starting from the outskirts of the city and beyond, converging on the centre and then moving together along the route of the demonstration before dispersing again. In this way, a population's urban movements during a historical time will be shown in their individual and collective motion; an unintentional social choreography revealed; a space that still partly exists is illuminated for a brief moment before receding back into the changing city.


A second outcome of this work will be a collective audio walk, to be experienced by a large group of people who are invited to retrace the route through the city and round the ring to the former Stasi headquarters, the solitariness of listening to an MP3 through headphones transformed into a group action, this group action transformed at times into a re-enactment through periodic framing within a historical context, suggested by the audio guide. The project will ask how one can shift the attention of the listener/walker to reconsider urban spaces as sites of resistance. How do we experience/ remember/ reconsider pivotal historic acts from 20 years before, in a city that has changed? How can we create collective performative experiences in urban spaces through the power of suggestion and minimal technical intervention?